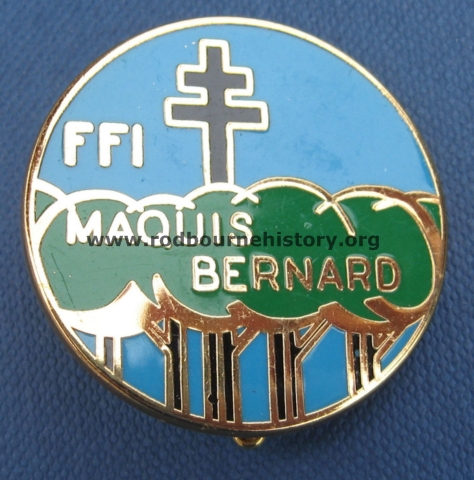 Additional Information – This was a commemorative badge issued at the 45th Anniversary ceremony of the formation of the Maquis Bernard French Resistance cell in the Morvan area near Dijon in France. The ceremony took place in 1989 where Ken Sturmey might have been present. Sgt Ken Sturmey of A Squadron, 1st SAS Regiment fought with this group during “Operation Houndsworth” in 1944.

For information on the ceremony click on ANNIVERSARY . We apologize for the garbled English but the article was auto translated from the original French article.

John Dray’s brother Arthur was with Ken on this mission and John made a video of a pilgrimage he made with his nephews to the Morvan region to record  his brothers exploits. In this video John outlines the role of the SAS and the Maquis Bernard during “Operation Houndsworth”.  Click on VIDEO to view.